Peter Lowe is an English artist. Since boyhood he has been engaged in a search for fundamental principles in art, which has led him to geometric abstraction. He is best known for his series of relief constructions in perspex and wood, entitled Volume and Void. He has had 11 one-man shows since 1974, and has participated in more than 120 group exhibitions. His work has been seen widely in Europe and is in 18 public collections, including Tate Britain in London.

Lowe was born in Hackney, London, in 1938. Inspired by J.W.Turner, he painted watercolours of Thames scenes. These gained him entry to Goldsmiths‘ College of Art in south London, where he was taught by Kenneth and Mary Martin among others. He recalls he made the move away from figurative art with a sense of excitement at embarking on a “great adventure”.

His work can be seen as a development of Cubist experiments with collage and rotational movement to create dynamic compositions. He says he realised that one could make such works using simple geometric shapes such as squares (or cubes), triangles and circles, without reference to “pipes and guitars”. His compositions often show linear progressions with a definite beginning and end, giving a sense of completeness.

He has made moveable sculptures, oil paintings, drawings and prints, sometimes using computers, as well as the reliefs for which he is best known. Some of his ideas have been translated into outdoor installations.

Lowe taught at Leeds College of Art from 1962 to 1964, where he worked with the noted teacher Harry Thubron. He also taught at the Barry Summer School in Wales in the 1960s as an assistant to Kenneth Martin. In 1965 Lowe became a lecturer at Goldsmiths and stayed until retiring from teaching in 2000.

He was married to Tessa Jaqueline Smith (1938-2007) and they had two children. He lives and works in Tulse Hill, south London. 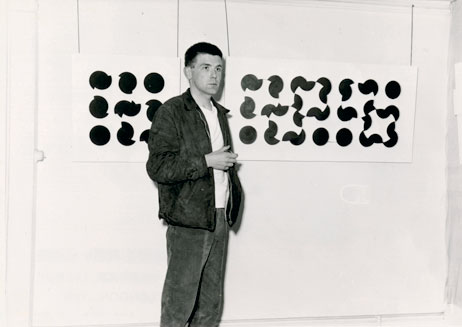 Lowe at the opening of his exhibition at the Drian gallery, London, 1962 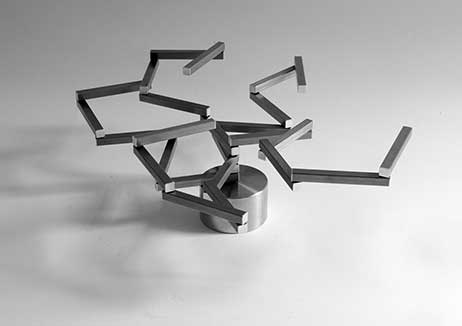 An installation in a German park: See References